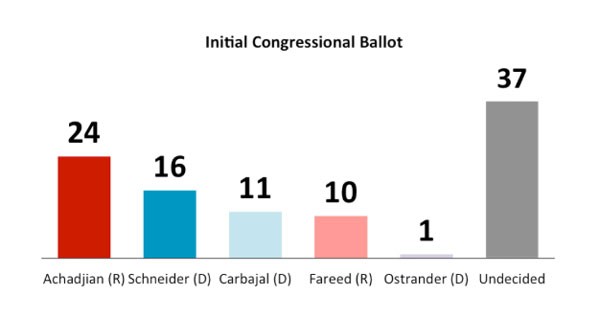 – A new Lake Research Partners poll of open primary voters in the 24 Congressional District shows Republican Assemblyman Katcho Achadjian has the lead on the initial open primary ballot. Achadjian has 24-percent, Democrat Santa Barbara Mayor Helene Schneider 16-percent, and Democrat Salud Carbajal 11-percent. Schneider leads other Democrats on the initial ballot and pulls further ahead once voters are introduced to all the candidates. The poll was released by the Schneider campaign. All candidates have room to grow, with nearly two-fifths 37-percent of voters undecided.

After voters hear positive profiles of all the candidates, Schneider closes the gap with Achadjian, advancing from 16-percent to 23-percent of the vote. Carbajal, whose profile introduction included his endorsement from Congresswoman Lois Capps, only grows his support slightly, from 11-percent to 15-percent.

Lake Research Partners conducted a telephone survey of 350 likely June 2016 voters in California’s 24th Congressional District. The survey was conducted from July 26-28, 2015 and has a margin of error of +/- 5.2.