After threatening “war” in a voicemail, News Media Corp. President John Tompkins followed through this week with a “cease and desist” letter to Scott Brennan, owner of Access Publishing and the Paso Robles Daily News. “When he left that message last month I did not publish it immediately because I wasn’t sure if he really meant it,” Brennan says. “When he had lawyers contact me Wednesday, I knew he was serious and decided to make the public aware of it.” 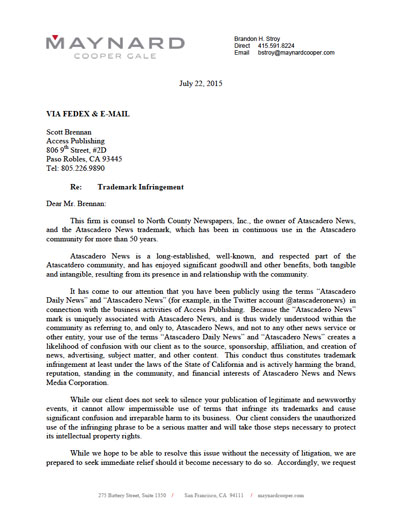 The letter accuses Access Publishing of trademark infringement for using the name “Atascadero Daily News.” It is too similar to News Media Corp.’s “Atascadero News,” the letter says.

The letter threatens a lawsuit and reads: “Atascadero News is a long-established, well-known, and respected part of the Atascatdero (sic) community, and has enjoyed significant goodwill and other benefits, both tangible and intangible, resulting from its presence in and relationship with the community.

“We request your written confirmation by 5:00 PM PT on Monday July 27, 2015, that you will cease and desist from any further use of the terms ‘Atascadero Daily News,’ ‘Atascadero News,’ ‘@atascaderonews,’ or any similar term, name, or phrase that would be confusingly similar to the ‘Atascadero News’ mark. If we do not receive such confirmation, we will have no choice but to seek injunctive relief.”

The letter was sent by attorney Brandon Story at the San Francisco office of Maynard Cooper Gale. It arrived via email and in a FedEx package delivered Thursday. The letter claims to be a “confidential communication,” however Access Publishing made no such agreement of confidentiality, Brennan says.

“This letter is part of an ongoing threat against my family business and livelihood,” Brennan says. “Mr. Tompkins was once a hero of mine. I worked for him from 1995 to 2006. I learned a lot at his company. I appreciated the opportunity he gave me and also made him millions of dollars. I really looked up to him and spoke highly of him. That’s why I was so shocked and disgusted to get a voicemail from him threatening me and I am sickened by what I view as anti-competitive behavior,” Brennan says. 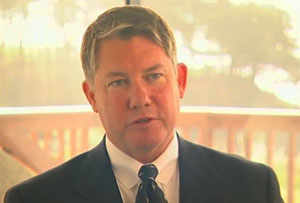 John Tompkins, as featured in a video on thoughts-about-god.com

“We chose to use the name ‘Atascadero Daily News’ because it describes in very simple terms what we are doing,” Brennan says. “We used a Twitter handle @atascaderonews, because it was available and because @atascaderodailynews exceeded the number of letters you can use in a Twitter handle. We did, however, change it to @atowndailynews.

“We operate Atascadero Daily News as a free website, while Atascadero News is available on a subscription basis, either in traditional newspaper format or in an ‘E-Edition’ version. In the time we have operated Atascadero Daily News, we have received no indication that anyone in the community is confused by the name we have used for our publication,” Brennan says.

“I am not a lawyer and I cannot afford a big-city lawyer specializing in trademark law like theirs,” Brennan says. “We are just hardworking people trying to make a living in North County. I’m not sure how we will respond to this lawsuit threat right now, but I am not going to put one dollar in to a legal fight against a multi-millionaire. That would be silly.”

The Paso Robles Daily News requested comment for this story from John Tompkins, who lives near corporate headquarters in Illinois, through News Media Corp.’s attorney, but received no comment. 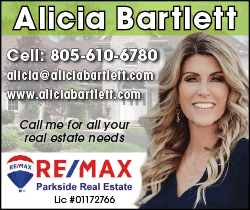