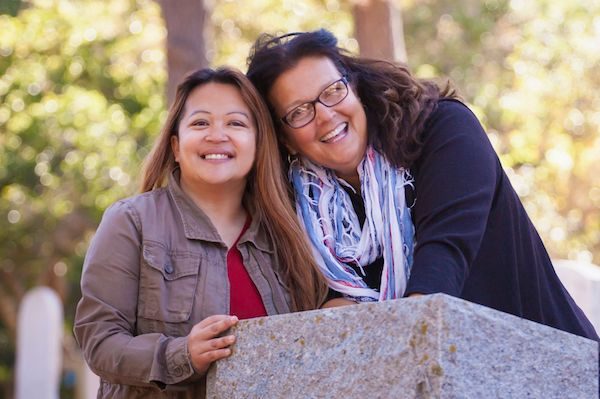 Elaine Chaney of Los Osos and Paula McCambridge of Morro Bay are co-hosts of the comedy podcast, Wait, Whaaat? featuring stories on all topics of the weird and unusual. Photos by Sharon Foelz.

–Elaine Chaney and Paula McCambridge want to make you die laughing – through their podcast, ​Wait, Whaaat? where they share stories of the “strange and unusual.”

The women are San Luis Obispo County writers and all-around storytellers who sparked the idea to start a podcast when they met in another story-telling capacity – their jobs as tour guides at a local state park.

Soon after meeting, the co-workers bonded through comedic break-room banter and learned that they each had forged communications careers through much more than their public speaking positions with their current employer. McCambridge is a journalist, columnist and editor, and Chaney writes humor, feature stories and does stand-up comedy.

“I had been thinking about starting a comedy podcast about the paranormal or conspiracy theories, and when I met Paula, I thought right away, ‘What a great fit,’” Chaney said. “I asked her if she wanted to start a podcast together, and here we are.”

Added McCambridge, “I remember the day at work when Elaine asked me, ‘Do you want to do a podcast together?’ I answered her right away, ‘Yep.’ We worked out the details after that.” That was nine months ago. Today the podcasters have more than 6,000 downloads.

Wait, Whaaat?​ itself, though, is just the beginning. McCambridge and Chaney say they will be launching their YouTube channel by the end of the year, which will consist of 10-15-minute short videos of the comedy duo in action. 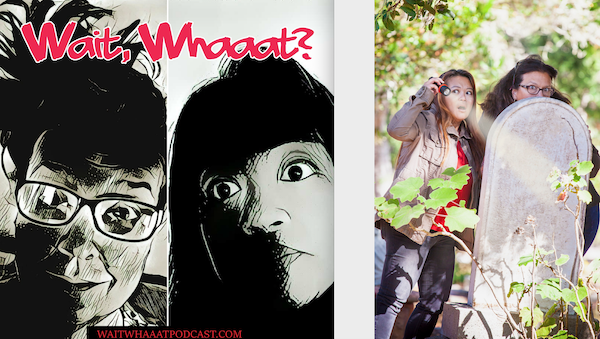 “I always say, ‘Be fully alive until you’re dead,’” McCambridge said. “We’re not kids but still having a lot of fun. We want to inspire and motivate others to do the same, and if we can scare you and make you laugh at the same time — icing on the cake,”

Chaney agrees with McCambridge but pointed out they don’t agree on everything. “We’re a happy mess; we do bad accents – a lot of bad accents,” Chaney said laughing. “But we do all of that together and have a good time. Our only disagreement so far has been about Madonna. She’s obviously the Queen of the World, but Paula isn’t evolved enough to realize that yet.”

A new hour-long episode of ​Wait, Whaaat?​ launches at 2 p.m. every Friday on all popular sites, such as Itunes RadioPublic, Stitcher, Spotify, and Google Podcasts, but all links to the podcast and YouTube channel can be found on the website, WaitWhaaatPodcast.com. The co-hosts answer all emails, so if you have ghost stories, questions, or anything else on your mind, email ​wait.whaaat.show@gmail.com​.