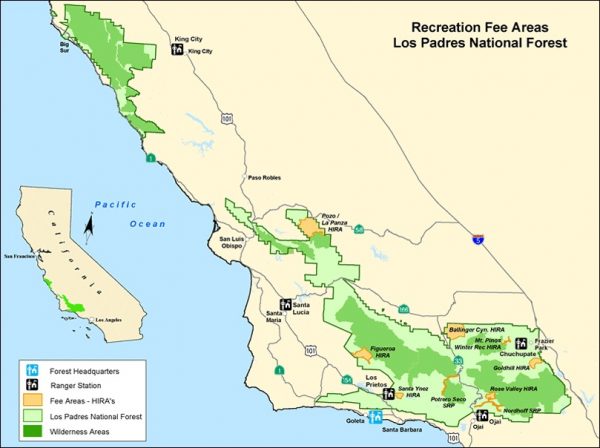 –The U.S. Forest Service and a Santa Barbara-based conservation group have formally agreed to take a series of steps aimed at reducing the impacts of target shooting throughout the Los Padres National Forest in central California. The agreement – approved in U.S. District Court earlier this month – resolves a 2018 lawsuit challenging the agency’s failure to address the proliferation of litter, soil and water contamination, wildfires, vandalism, harm to endangered wildlife, and other environmental and public safety hazards caused by decades of unmanaged target shooting across nearly two million acres of national forest land.

Under the agreement, the Forest Service will prepare detailed studies and consult with federal wildlife agencies to assess and reduce the impacts of target shooting on rare and endangered plants and animals, such as the California condor, California red-legged frog, southern mountain buckwheat, and Kern mallow. The agreement also provides for a temporary ban on target shooting and requires the Forest Service to notify the public about the closure, to post signs at shooting sites, and to take other steps to enforce the ban on target shooting.

“Our public lands have suffered from decades of litter, vandalism, natural resource damage, and unsafe conditions caused by unregulated target shooting,” said Los Padres ForestWatch executive director Jeff Kuyper. “This agreement will make our public lands cleaner and safer places for everyone to visit, will better protect rare plants and animals, and will allow shooters to continue practicing their marksmanship at designated, well-managed sites.”

“The Forest Service promised to close the Los Padres National Forest to unrestricted target shooting almost fifteen years ago,” said Earthrise Legal Fellow Kathryn Roberts. “We hope that the temporary closure required by this agreement will demonstrate that the forest can, as a practical matter, be closed permanently to unregulated target shooting and that such a closure would greatly benefit the forest’s native plants and wildlife and those who enjoy recreating in the forest responsibly.”

“Unregulated target shooting poses a major threat to sensitive species, including the California condor,” said Maggie Hall, Staff Attorney at the Environmental Defense Center. “We applaud the Forest Service for complying with the important Endangered Species Act consultation process, designed to prevent harm to these species and their habitat.”

The lawsuit was filed in August 2018 by the nonprofit conservation group Los Padres ForestWatch to improve the management of target shooting in the Los Padres National Forest. The suit alleges violations of the National Forest Management Act and the Endangered Species Act, and seeks to enforce a permanent ban on unmanaged target shooting that the Forest Service approved in 2005, but never implemented. ForestWatch is represented by the Earthrise Law Center in Portland, Oregon and the Environmental Defense Center in Santa Barbara, California.

The ban only applies to unmanaged target shooting. Legal hunting with a valid license is not affected, and target shooting can continue at the Ojai Valley Gun Club and the Winchester Canyon Gun Club, both of which are staffed and operated by nonprofit organizations permitted by the U.S. Forest Service.

Three other national forests in southern California have similar, permanent, bans in place. The Angeles, San Bernardino, and Cleveland National Forests have prohibited target shooting outside of formally-designated shooting sites for decades.

In addition to the two permitted shooting sites in the Los Padres National Forest that remain open, shooters can practice their marksmanship at more than two dozen indoor and outdoor ranges located throughout the area. An interactive map of these ranges can be viewed at LPFW.org/where-to-shoot or www.wheretoshoot.org courtesy of the National Shooting Sports Foundation.

According to the Forest Service website, “Law Enforcement Officers will be strictly enforcing this Forest Order in all areas of the Forest.” Individuals cited for violating the ban will face a mandatory appearance in U.S. District Court, where the judge can levy fines of up to $5,000 and/or six months in jail. Visitors who observe illegal target shooting should immediately contact 311 to file a report that will be relayed to Forest Service law enforcement officers and the local sheriff.

A ban on “dispersed” target shooting in the Los Padres National Forest was first adopted in 2005, when the Forest Service updated its management plan for the area. In approving the new plan, Regional Forester Bernie Weingardt stated:

But in the decade following, the ban was not implemented. A 2016 report by Los Padres ForestWatch – a local nonprofit organization that protects the Los Padres National Forest—found nearly one hundred informal shooting sites throughout the forest. The report—Forest in the Crosshairs: The Environmental and Health Impacts of Target Shooting in the Los Padres National Forest—revealed large amounts of trash at these sites, along with dozens of trees left dead or dying from repeated shooting. Televisions, computer monitors, refrigerators, microwaves, and other household appliances were frequently used as targets, contaminating nearby soils and waterways with toxic heavy metals. The report also found numerous shooting sites within the forest near known nesting or roosting sites for the California condor, an endangered species whose recovery is especially threatened by lead poisoning from bullets. Shooting-related vandalism was also recorded at public restrooms and trailhead signs, costing tens of thousands of taxpayer dollars to repair.

The Forest in the Crosshairs report also noted that target shooting has caused at least 53 wildfires in the Los Padres National Forest during the past 25 years, scorching a combined 74,478 acres of forestland according to official Forest Service data.

The Forest Service refused to implement its own target shooting ban, and ForestWatch outlined the agency’s legal responsibilities in an October 2017 letter. When forest officials took no action, ForestWatch filed suit ten months later in August 2018. The suit – Los Padres ForestWatch v. U.S. Forest Service – was filed in U.S. District Court in Los Angeles. The lawsuit sought to require implementation of the decade-old ban, and challenged federal wildlife agencies’ continued reliance on a ban that was never implemented to ensure adequate protection of endangered species in the forest.