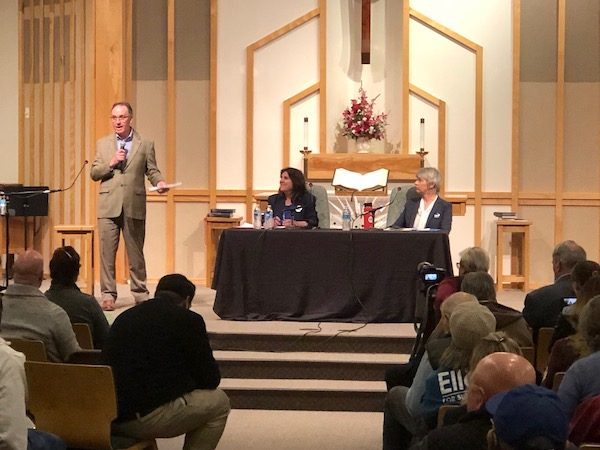 –About 375 people attended Thursday night’s candidate’s forum at Atascadero United Methodist Church. The forum was sponsored by the Atascadero Chamber of Commerce.

Supervisor Debbie Arnold and challenger Ellen Beraud described their backgrounds and answered five questions prepared by members of the chamber of commerce.

Before she was elected supervisor nearly eight years ago, Debbie Arnold served as a legislative aid for supervisor Mike Ryan and Assemblyman and State Senator Sam Blakeslee. She majored in animal science at Cal Poly, and after she graduated, Arnold ran a child care service in Atascadero.

Ellen Beraud is a small business owner and was a healthcare professional at Atascadero State Hospital. She served as a city council member for four years, and was also mayor for one year and served for several years on the planning commission. Beraud opposed the Faces of Freedom Memorial being located at the Sunken Gardens, opposed a new Walmart in town, and promoted creekside setbacks.

The questions presented by the Mike Manchack of the Economic Vilatity Commission included issues like affordable housing; wages and cost of living in the county; the county’s economy; and issues related to the housing industry like short-term rentals.

Thursday night’s forum was the first of nine forums and debates leading up to the election in the supervisor’s race. The decisive primary election is March 3.