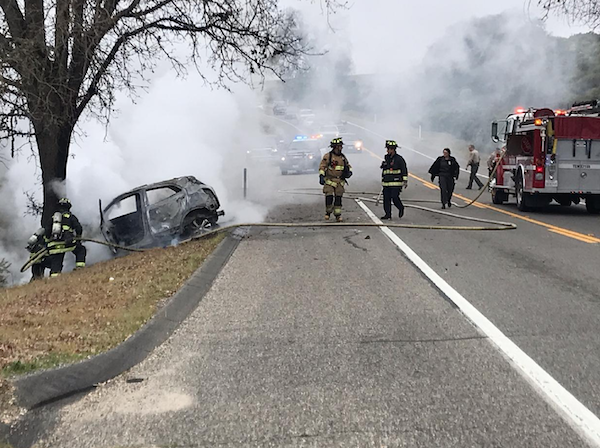 Car burst into flames, driver was able to extricate herself

–Highway 46 near Hidden Valley Road in Templeton was closed Saturday morning because of a vehicle crash and fire. The accident occurred just before 9:30 a.m. when Julie Ellen Walton, 61, of Cayucos, was traveling eastbound on Highway 46 at approximately 55 mph in a 2019 Buick Encore when she drifted off the road. She was texting on her cell phone when the accident occurred, according to reports.

The vehicle left the road and hit an oak tree, bursting into flames. Walton was able to extricate herself from the vehicle before it became fully engulfed. She was taken to Sierra Vista Regional Medical Center with major injuries, the CHP said. No other vehicles were involved.

The investigation is ongoing. No further information is available at this time.