Rail issue will be placed on a future agenda 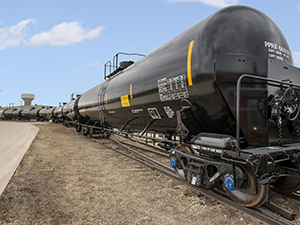 After being tasked with researching Phillips 66’s rail spur project that could result in multiple oil train cars traveling through Paso Robles each week, Mayor Pro Tem Fred Strong gave a report on his findings during council business and committee reports at the end of last week’s council meeting.

“We have been asked to consider the impacts of a proposed commercial enterprise upon the people and property within our jurisdiction and to take any action that is appropriate to protect everyone’s right, including the health and safety of all,” Strong said, adding that he read through a large stack of reports on the issue including Phillips 66 background and business reports, as well as the draft environmental impact report and the more than 11,000 comments from the public. He also talked to numerous people involved in the issue.

“I have contacted the leadership of the [Federal Rail Administration] regarding our options,” Strong said. “First, I’ve found out that the rules regarding crude oil shipments have not been finalized. We are a ‘stakeholder’ and have the right to comment and have an impact upon what the final regulations will be… Indications at this point, are that the rules that might affect us the most involve speed limits for trains containing more than 20 units of flammable liquids. There is a suggested 40 mile per hour speed limit to reduce the possibility of derailment. Special braking systems are also being strongly considered.”

He said that the council’s task could be asking for a maximum limit on the number of cars with flammable liquids that can be transported in a single train, as well the council could ask to be redefined as a “high threat urban area” due to the high risk of derailment, according to the California Office of Emergency Services.

“Other jurisdictions have chosen to pass resolutions or regulations forbidding shipments of this type to come through their jurisdictions,” Strong said. “This is a useless public relations ploy that gets a lot of publicity, but achieves nothing as we do not have the right to regulate interstate commerce.”

Because the report was not placed under council business, the issue could not be discussed by the council as it did not include a public comment period. At the conclusion of Strong’s report, Mayor Steve Martin asked if he had council consensus to request that it be placed on a future council agenda. He got several nods and vocal affirmation, so he directed staff to place the issue on a future agenda.