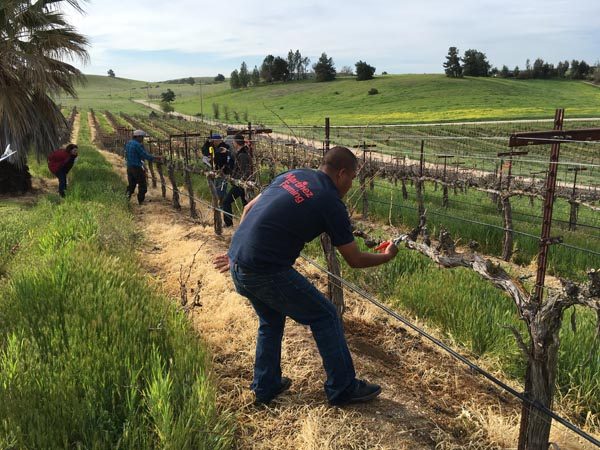 Entry forms due by Feb. 8

–The Central Coast Pruning Competition will be held at Fronty Vineyards in San Miguel at 8 a.m. Entrants are asked to complete the entry forms by Feb. 8. To sign up, visit their Facebook page or click here.

How does pruning grapevines work? 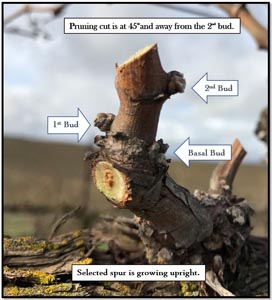 This time of year you can see our vineyard rows dotted with vineyard workers bundled up and pruning back last year’s growth to encourage strong, healthy and productive canes to grow the grape clusters of 2017’s vintage. In theory, it’s a simple task: cut the canes down to two bud length (about an inch tall).

But we all know theory is never reality- yes it’s all about the cut, but it needs to be the right cane growing in the right direction, cut correctly on a specific part of the cane and at the right angle, once all that’s figured out the cut cane needs to be ripped off the wires that have held it in place all year (the cane’s tendrils have hardened from soft green to bark strength). Then there are the errant shoots and suckers to remove that have grown over the year since last year’s pruning when their buds where hidden under the grapevine’s protective bark. So far all this has been the ‘easy’ part- the mastery comes in Spur Positioning. Wine grape clusters grow from the dormant buds on the canes of spurs that are over a year old, and after a few years those spurs produce less and need to be removed for a new spur to take it’s place. A new spur is created from those errant suckers and shoots that grow along the cordon. These old spurs can be 6+ years old and have grown dense and 1-3 inches wide- time for the long loppers and serious upper body strength. A grapevine is considered ‘pruned’ when:

• the cordon is completely free of any growths other than the spurs with 2 buds (not counting the basal bud), each about a hands width apart
• the wires are clear of last year’s growth
• the cut canes are left in the center of the row (as brush to be recycled into organic matter for the soil)
• the berms under the vines are clear of debris. 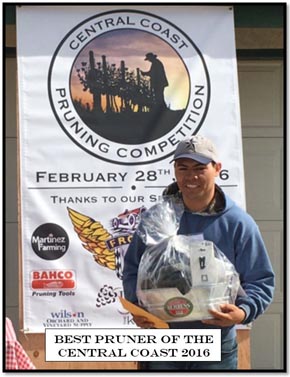 The Pruning Competition will start with a welcome from the judges and a review of sample spur pruned vines with good/bad cuts set up in the vineyard. After a short question and clarification session, the competition will begin. Contestants will then cut eight vines for time; that time will be converted into points. The judges will then review each vine- awarding additional points for correct cuts or spur positioning and subtracting points for errors. Skill is what wins this contest. The six contestants with the highest points earned will go into a “Prune Off” Round where they will prune eight more vines. The highest score of the “Prune Off” Round will win the title of “Best Pruner of the Central Coast.”

Felix Diaz won last year’s Pruning Competition with his spot-on cuts, minimal errors and the extra points he earned by replacing spurs. CCPC was inspired by the pruning contests of Napa and Sonoma where the contestants proudly represent and compete on behalf of their vineyard or farm labor company. Central Coast Vineyards, Wineries and Labor Contractors are invited to send out their vineyard crew members to compete for the title of “Best Pruner of the Central Coast.” Vineyard workers may also enter independently.

The judges are Joel Castaneda of Vineyard Industry Products, Lowell Zelinski of Precision Ag Consulting, Craig MacMillan of the Vineyard Team, Dan Rodrigues of VinaQuest and Richard Sauret of Sauret Vineyard. More pictures of pruning examples, the 2016 competition and winners are available on their facebook https://www.facebook.com/CCPruningCompetition/ or website http://www.frontyvineyards.com/events/central-coast-pruning-competition.php.