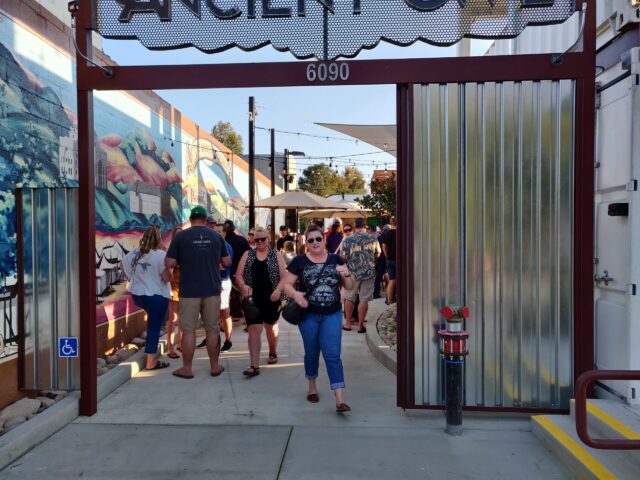 Event drew in around 400 people

–Over 20 different local businesses contributed to making last Friday’s pub crawl event a success, as about 400 people showed up to enjoy the drinks and food that Atascadero had to offer from 5 p.m. until closing time.

The event covered an area of around three city blocks and took participants through parts of Atascadero’s downtown like the Sunken Gardens and the Carlton Hotel. Parking spots in the heart of the event at Entrada Avenue were quickly taken up since the city of Atascadero offers free parking for visitors to the downtown area. Many people parked a little further off at places like Wild Fields Brewhouse near the Galaxy Theatres Atascadero where parking spots were readily available.

The event started off strong with the manager Alex of Dead Oak Brewing Company reporting that they even had someone come in right at 5 p.m. for the event. The doors of participating businesses seemed like they were rotating on Friday, as there would always be someone coming in or going out as a part of the event. By 7 p.m. there were even lines at some of the most packed places, like Ancient Owl Beer Garden & Bottle Shoppe, which had its first live DJ performance that same night.

“We’ve been waiting for this for a long time,” said Ayako Williams of Kula Vineyards and Winery.

Diverse types of businesses were involved in the pub crawl like Carndonagh Kitchen which typically offers catering services, yet opened a pop-up eating spot offering Irish food right next to Kula Vineyards and Winery and pub crawl organizer Paul Zuniga’s own Fossil Wine Bar. Other businesses like Bramble Pie Company offered pastries for anybody with a sweet tooth.

The event brought out a lot of different people to Atascadero, including regulars, new visitors to local businesses and some people from out of town.

The list of participating businesses included, but was not limited to the following: