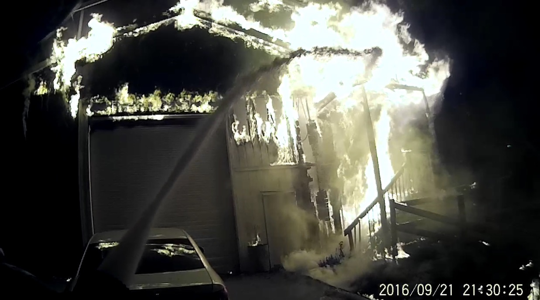 The photograph is taken from the driveway in front of 8600 San Gabriel and depicts what initial fire crews were presented upon their arrival. Other firefighters were around the back of the building rescuing Ayres at the time of this photograph. (Photograph taken from fire helmet camera footage.)

Fire was in a barn with residence on second floor

–Atascadero Fire and Police responded to a residential structure fire that occurred Tuesday in a barn with a residence on the second floor at 8600 San Gabriel in Atascadero. The building’s occupant, James Ayres, was reportedly stuck in the burning structure when he called 911, and was rescued from the flames by fire personnel. Ayres is reportedly un-injured.

On Tuesday evening, at approximately 9:22 p.m., Atascadero Fire and Police Dispatch received the 911 call from the occupant, James Ayres. Ayres was calling from inside the burning structure and was unable to exit due to the tremendous amount of heat. Dispatchers remained on the phone with Ayres and kept him calm, focused and directed him to stay next to a window until firefighters could arrive.

First arriving engines found a large barn with a single family residence on the second floor with heavy fire and smoke coming from the front of the building. Fire Crews were faced with an occupant trapped on the second floor unable to exit due to heavy fire involvement. Crews immediately laddered the second story and affected the rescue. Other crews attacked the fire from the exterior to control the spread and reduce the heat so firefighters could make entry into the structure. Firefighters confirmed there were no other occupants in the building.

Fire crews were tasked with the immediate rescue of the Ayres. The resident was examined at scene and treated for minor smoke inhalation. It took crews approximately 30 minutes to contain the fire. Crews remained at scene for approximately 2 hours for overhaul and investigation.

It appears that the fire started outside the structure and spread to the interior, according to Atascadero Fire. The cause is still under investigation. There was a total estimated property and content value loss of $5,000, with $75,000 worth of property saved.