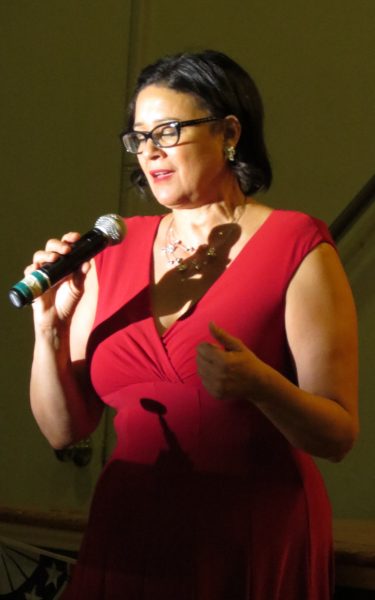 Teacher Emy Bruzzo performs her lovely rendition of “You Are the Wind Beneath My Wings.”

–Last Friday, people from all over North County showed their support for both the Atascadero High School Show Choir and local military veterans at the AHS Choir Booster’s USO Show fundraiser. The event, held at the American Legion Hall in Templeton provided guests with a night of music, food, and fun.

The entertainment provided by the Show Choir was the main event of the fund-raiser. Students serenaded the audience with such tunes from bygone decades as “Accentuate the Positive” (sung by Jimmy Purcell) and “Fly Me to the Moon” (sung by Christina Rogers). Similar songs were also given a unique rendition by other choir members including, Eden Bedoya, Gabi Bruzzo, Audrey Rose, Katie Cardin, April Rutherford, Emily Vose, Andree Zavala , and Ashlyn Brookshire. In a highlight moment of the night, Show Choir teacher Emy Bruzzo gave a heartwarming “thank you” to all veterans and servicemen present at the event by singing “You Are the Wind Beneath My Wings.” It was a  performance that brought a tear to the eye of many attendees. Aside from solo performances, the entire AHS Show Choir also sang “Boogie Woogie Bugle Boy” which got the audiences’ feet tapping. The talented performances by the students were worth the price of admission alone, however, guests were treated with other special commodities throughout the show. 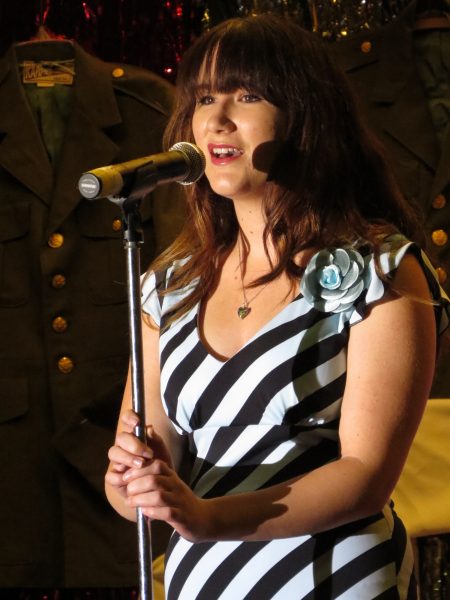 April Rutherford delighted the audience as she sang “Its Been A Long Long Time.”

In addition to enjoying live solo numbers sung by the students, the guests could also take part in both the live and silent auctions set up later in the evening. The live auction, which was directed by choir students, Zack Kitzmiller and Ryan Galvez, included such items as reclining lawn chairs, tickets to “Rent” at the Cal Poly PAC, and a one night stay at the Atascadero Holiday Inn. The two auctioneering students continually kept the audience lively and interested in the items being sold.

Members of the AHS Show Choir were seen serving various horderves to guests, while also tending to their other needs throughout the night. The main course of the evening consisted of barbecue tri-tip or a vegetarian lasagna for non-meat eaters. The meal was prepared by the volunteer staff of parents and friends of the Show Choir students. Wine and other beverages were also provided by the choir boosters. 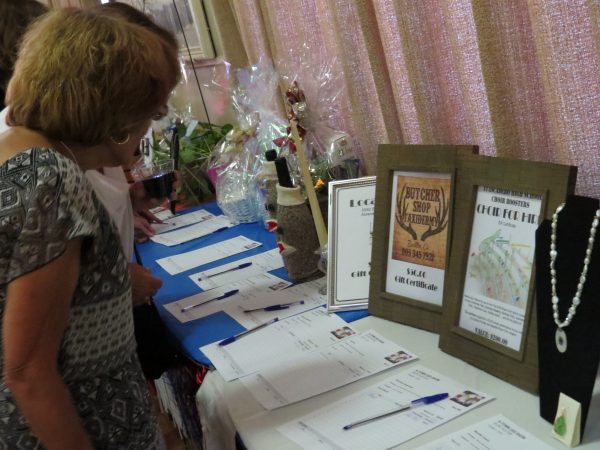 “I’m so proud of everyone who helped out tonight,” said Emy Bruzzo, commenting on the event’s success, “The kids put in so much effort on their part.” Speaking of the students’ singing abilities, Bruzzo later said, “They were amazing! They are all super talented, we were very lucky to have them.” Bruzzo also expressed her gratitude toward all of the volunteers and their efforts to make the events put on by the AHS Show Choir possible.

Although the total amount of money raised is unknown at this time, the AHS Show Choir still has high hopes to put on more events throughout the 2016-2017 school year. Currently, they are preparing for their shows scheduled to run during the holiday season.