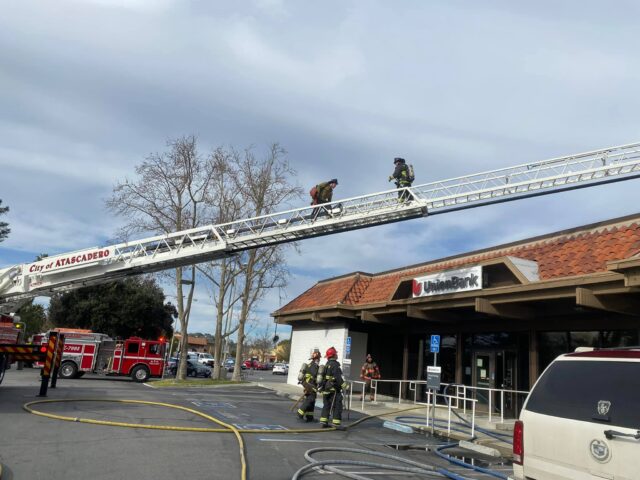 An Atascadero Fire & Emergency Services ladder truck at the scene.

No injuries were reported at the scene

– On Thursday at 1 p.m., the Atascadero Fire and Emergency Services responded to a reported commercial structure fire at Union Bank, 7199 El Camino Real.

Upon arrival, crews found heavy smoke coming from the roof near the back corner of the building. Crews initiated an offensive operation and found the interior of the building all clear of smoke and fire.

Three employees, who were unaware of the emergency, were evacuated from the building.

Crews made access to the roof and discovered a portion of the heating and ventilation system was burning.

Fire crews used their ladder truck to access the roof and extend a hose line from the ladder to extinguish the fire. No other property was damaged and no injuries were reported.

The fire was contained within 25 minutes with the help of four fire engines, one ladder truck, two chief officer,s and one ambulance on scene. The Atascadero Police Department also responded and assisted with the evacuation of employees.

Fire crews remained on the scene for 90 minutes to complete the extinguishment of the heating and ventilation unit.

The cause of the fire remains under investigation.

Video of the fire: