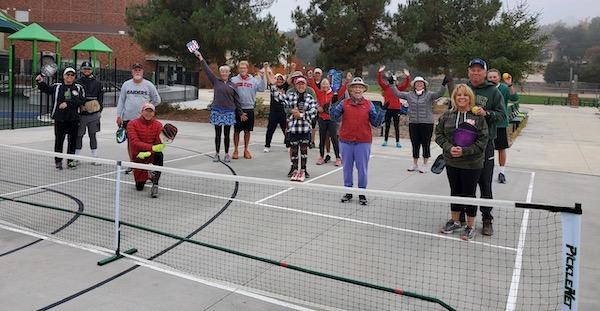 –At the most recent Atascadero City Council meeting, the council unanimously approved funding, from park impact fees, of at least $150,000, for the cost to build four permanent pickleball courts at the Colony Community Center. This is in response to the explosive growth of the sport locally and nationally. Board members of the Atascadero Pickleball Club, Colleen Avery, and Edmund Temple, along with the president of the club, Barbara Sims, provided a long list of benefits of pickleball, during public comment. The total cost is estimated by the city to be about $260,000. Mayor Pro-Tem, Charles Bourbeau said, “I would like to see this get done sooner rather than later.” This was repeated by other council members.

Public Works Director Nikc DeBar described the property which the city has assigned for the pickleball courts. He said the city has no money to pay for the project, but the Pickleball Association is doing fundraising. So far, they’ve raised around $40,000 to build several new courts at Colony Park. The council agreed the city should work in partnership with the pickleball group.

Pickleball is the fastest growing sport in the country, and new players locally continue to show up and play on the basketball courts, using their own portable nets, and lines painted on by the city. Atascadero is the last community in San Luis Obispo County to provide permanent courts for its citizens. Part of the reason for the delay was having to build them from the ground up, whereas some other local communities were able to repurpose existing sports courts.

“I’m still pinching myself,” said Barbara Sims after the decision, “The community is going to enjoy these courts for many years to come.”

Sims spearheaded the effort to build these courts. She and other club members were successful in December 2019, in having the Colony Park Master Plan amended to include the pickleball courts. Ever since then, it has been “game on,” for the 60 member Atascadero Pickleball Club.

The Atascadero Pickleball Club invites anyone to come learn to play on the temporary courts. There are people routinely playing Monday through Friday in the morning, and on weekends many times, as well. Just bring yourself, as paddles are available to borrow. For more information, or to find out about donating to fund the courts, go to AtascaderoPickleball.org.

The council also received an update on cannabis regulations. Community Development Director Phil Dunsmore talked about the various aspects of the cannabis industry including retail sales, agriculture, and processing. He said so far the city has received mostly inquiries about retail sales, but that vertical integration may lead to more than one aspect of the cannabis industry. Councilwoman Heather Newsom recommended that the city do more outreach to learn what residents want and expect as far as cannabis industry development in the City of Atascadero.

The council also learned from City Manager Rachelle Rickard that the Tortoise Conservancy of Ojai sent the city a commendation for rescuing hundreds of turtles and tortoises during the Thomas Fire in 2017. That fire surrounded Ojai. The tortoises were transported to Atascadero’s Charles Paddock Zoo, and staff took care of the reptiles until the fire was put out in Ojai. After the fire was extinguished, those tortoises were returned to the conservancy.