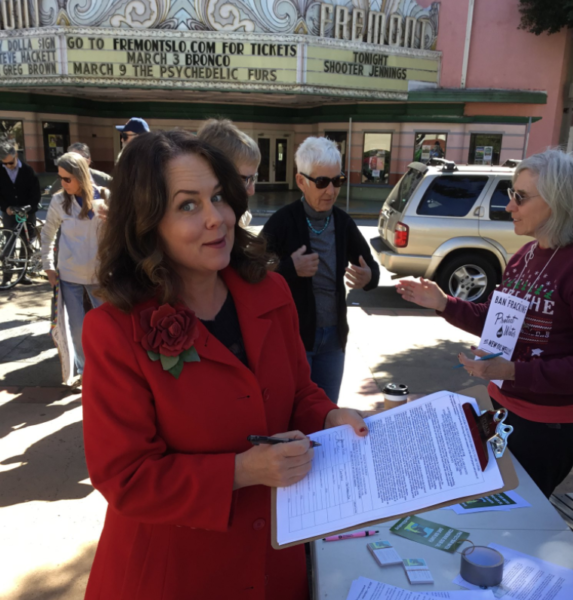 – Volunteers have begun gathering signatures to place the “Protect Our Water, Air, and Land: Ban Fracking and Oil Expansion in SLO County” Initiative on the November 2018 ballot. The initiative is sponsored by the Coalition to Protect San Luis Obispo County, a group of local volunteers working to protect local water, air and soil from pollution while encouraging a shift toward renewable energy, as called for in the county’s General Plan.

The initiative would amend the county’s General Plan, Local Coastal Program and County Code to prohibit using land in the county’s unincorporated areas for oil well stimulation treatments like fracking and acidizing. It would also prohibit new oil and gas well drilling land uses on unincorporated county lands. Under the initiative, existing oil and gas land uses would be allowed to continue, but not expand. The initiative also protects vested rights and allows the county to grant limited exceptions to avoid taking private property.

History of oil spills on the Central Coast

California’s Central Coast has been compromised by several major oil spill disasters since 1926, when Union Oil’s Tank Farm Road storage facility was set on fire by a lightning strike, spilling 8 million gallons of oil. Much of that oil ended up in the ocean and sparked an oil fire that spanned 900 acres. In 1969, Union Oil’s Platform A in the Santa Barbara channel had a catastrophic blowout that fouled beaches as far north as Pismo Beach with 100,000 barrels of crude oil. This event led to the creation of the Environmental Protection Agency. The 1988 Union Oil Guadalupe oil field disaster allowed 9 million gallons of oil to leak into a dune complex. And in 1994 the massive Avila Beach oil spill permeated the land under homes and businesses due to corroded pipes, requiring a virtual replacement of that small beach town.

“Our community bears the risks of oil production, while oil company shareholders reap the benefits,” explained Natalie Risner, coalition co-chair and small business owner of a women’s clothing boutique. “Expanded oil operations would leave us even more vulnerable to the poisoning of our water supply and increased air and soil pollution, not to mention the risk of another oil spill. Now is the time for county voters to prevent risky oil extraction techniques like fracking that would consume even more of our precious water supply. A large expansion will put more trucks full of hazardous chemicals on our roads and increase the risk of local earthquake activity from oilfield operations. The trade-off does not pencil out.”

San Luis Obispo residents have acted in the past to limit the risks of oil production in the county. In 1986, voters passed a citizen’s initiative to ban onshore infrastructure that supports offshore oil or gas development. Grassroots opposition led the Board of Supervisors to deny an oil development in Huasna Valley in 2012, and in 2014 to deny a crude oil train terminal that had been proposed by Phillips 66. The Coalition to Protect San Luis Obispo County is led by the grassroots volunteers who spearheaded these efforts in 2012 and 2014, in addition to many other local awareness-raising campaigns aimed at protecting the quality of life on the central coast.

Oil extraction in San Luis Obispo County is focused on the Arroyo Grande oil field, which produces one of the most toxic and carbon-intensive crude oils in the world. The oil is so thick it must be heated underground with injected steam, using a huge amount of water in the process.

“Toxic wastewater is injected underground into a designated drinking water aquifer, which could possibly pollute water wells in the Five Cities area. The proposed 480 well expansion of this oil field by Sentinel Energy is awaiting the approval of a drinking water aquifer exemption by the Environmental Protection Agency. Such an action would greatly increase these risks and, in the end, oil from this field is primarily exported to Asia and we are left with the toxic waste,” added Varni.

Proponents included a provision in the initiative to prohibit using unincorporated county land for oil well stimulation treatments like fracking and acidizing because the Monterey Shale formation underlies parts of San Luis Obispo County. Oil companies have identified this formation as a likely target for aggressive extraction techniques. Among other risks, fracking requires transportation and storage of hazardous chemicals, generates large amounts of toxic wastewater, and has been tied to increased seismic activity in other parts of the country.

“Our county is the ideal place to grow a business, raise a family, educate children and retire. It is a renowned destination for tourists, thanks to pristine beaches and quality agriculture products – including wine,” noted Doug Timewell, retired owner/vintner with Toucan Wines. “What’s important to residents of SLO County is evident by the local growth in tourism, which accounts for $1.6 billion of local revenues and 13 percent of local jobs. According to a 2016 report, agriculture generates another $915 million in revenue every year; education and new business development are also big economic drivers. It’s time for county residents to make our values clear, and to protect what is most important to us as a community. Is it our water supply, tourism, agriculture and quality of life, or the growth of a polluting industry that puts these things at risk?”

Initiative proponents will need to gather 8,850 valid signatures from registered voters in San Luis Obispo County to qualify the “Protect Our Water, Air, and Land: Ban Fracking and Oil Expansion in SLO County” initiative for the November 2018 ballot.